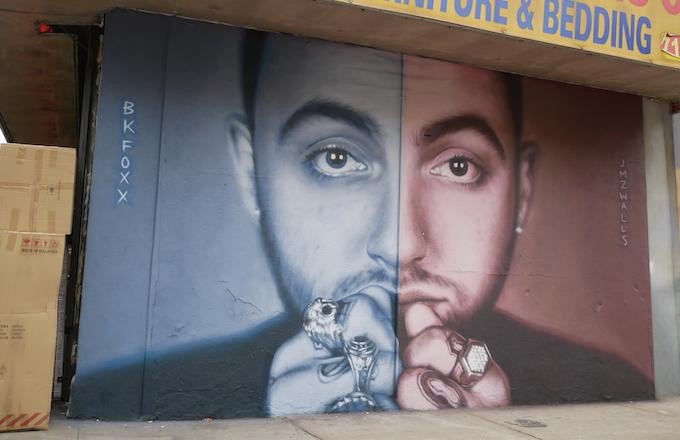 Just like we saw in Los Angeles a few weeks ago, another new mural has popped up in Brooklyn, NYC paying homage to the late Mac Miller. This time, NYC-based artist BKFoxx teamed up with JMZ Walls to create a two-toned mural portrait of Mac Miller in NYC. As you can see (below), the left side of the piece is finished with a blue tint, while the right side is presented in red.

“I think Mac Miller’s death had been kind of overlooked. It was such a shitty thing, he was only 26. And when someone ODs, it hurts,” BKFoxx told Complex. “Because in my generation, there’s been so much of it, we’re so used to burying friends and family members for that reason. And because I think to myself, how bad is living in this world for you that you just can’t? Especially as an artist—I can say from experience it’s really difficult to be creative in a society that values money and trends more than culture and real individuality.”

BKFoxx continued: “[The piece] is meant to be a representation of how we are complex and can be more than one thing at the same time. We can show one face to the world while hiding another. Something I find helpful to be aware of when thinking about other people.”

Fans can check out the mural in person at 1065 Broadway in Brooklyn, NYC. Peep the mural (below) courtesy of Drea Oppan. RIP Mac.