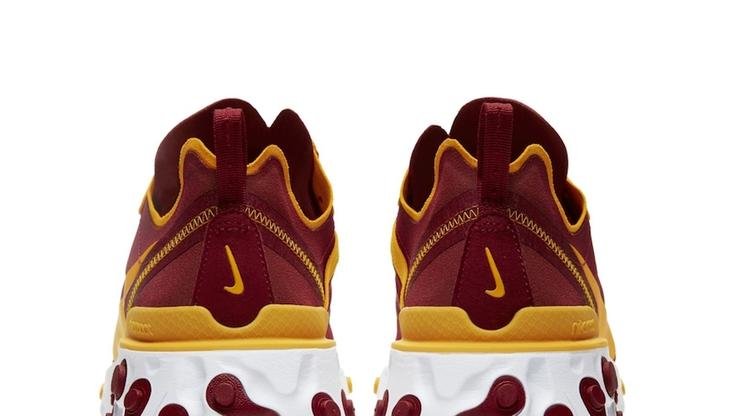 Nike apparently has multiple collegiate React Element 55 colorways in the works, including a pair for all of the USC Trojan fans and alumni such as DeMar DeRozan, Reggie Bush, Sam Darnold and JuJu Smith-Schuster.

Similar to the recently revealed Florida State Seminoles colorway, the “USC” Nike React Element 55 comes equipped with a team logo on the instep, as well as the insoles, with “Trojans” stamped on the tongue.

As you’d expect from a USC-themed sneaker, the kicks come decked out in cardinal red while gold handles the laces, eyestay, Nike Swoosh and detailing around the heel and ankle collar. As always, the React Element 55 is grounded by Nike’s super comfortable React cushioning, which comes in white with splashes of cardinal and gold to complete the look.

“Owing its geometric design to data drawn from everyday athletes, the React Element features original technology that took comfort to the cutting edge. Starting with a pressure map that tested individuals who walk heavily throughout the day, designers then drilled holes into the points where feet experience the most fatigue in the soles for unparalleled comfort.”

A release date for the Nike React Element 55 USC ($130) has not yet been announced, but I’d expect the kicks to arrive in the coming weeks as the Trojans kicks off their season at home against Fresno State on August 31.