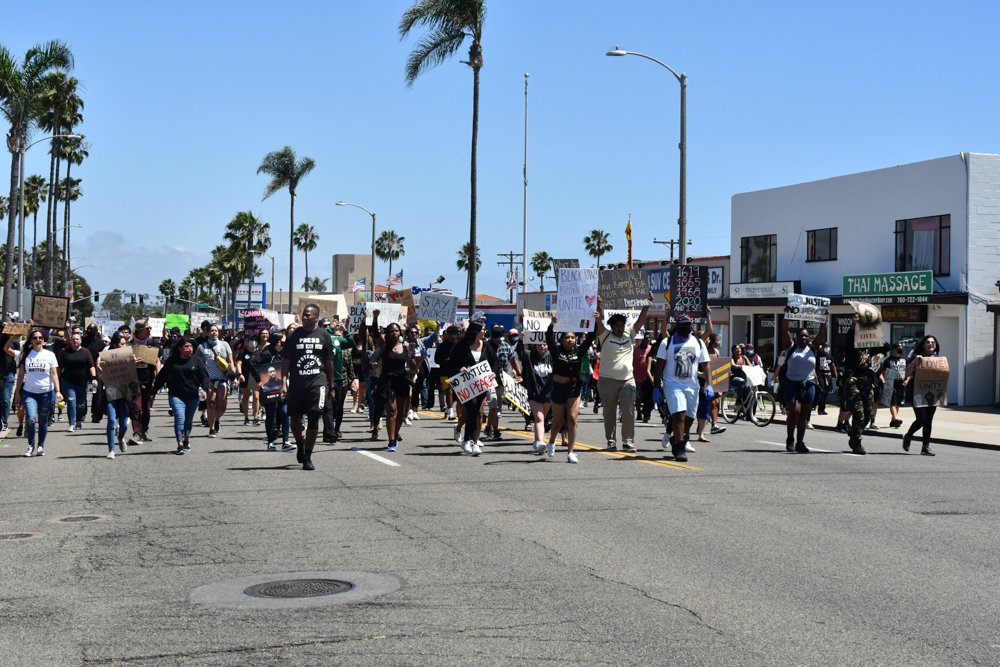 Posted at 16:51h in Featured Articles by Cory Austin 0 Comments

Oceanside, Ca. – Oceanside a melting pot to a multicultural community, over the last week has seen a series of protests advocating change, for timeless events sweeping the country. The murder of unarmed black men and women. Ongoing effects of malignant policing lead to the murder of George Floyd, Breonna Taylor, and Ahmed Arbery. Let us not forget the 2019 year with the unjustified murders of Botham Jean and Atatiana Jefferson. Both killed unexpectedly by police officers while being unarmed and unsuspecting. The community of Oceanside has been diligent in its feeling towards the unjust killing of black men and women, these countless murders have created a ripple effect that impacted people of all colors globally. Oceanside protesters worked alongside the police and other city officials to bring peaceful protests to the city and residents. The emotional outcry can be heard from all areas of the world with people standing up to a 400-year injustice that has plagued the black community, especially in America.

All over a black diaspora fights racism and discrimination in different forms globally, the hands of institutional racism seem to play differently for native Black Americans than some of their black immigrant family. Some black immigrants’ history in Black America may differ slightly, but the same outcome of discrimination can be felt as very real infection. Black Americans have a rich history, while innovators of so much, other parts of their history have been drenched in blood, including horrific levels of racism, hate, discrimination, slavery, deceit, lies, murder, rape. These vile acts were backed by laws that allowed crimes against Black Americans to go unpunished. Sanctioned by one of the most powerful governments in the world, America. Which unjustly punish an entire group of people solely on the color of their skin. How did we get here? The injustice against Black Americans are not exclusive to policing, but it’s one of many elephants in a room. The animosity between blacks and the police did not begin in the last 3 decades or with Rodney King. So how did we get here? The problem goes back further, As we dig into colonial expeditions and the founding of America. Spanish, Dutch English, French, Italian, and German all participated. Europeans that all had a stake in the trade, purchase and breeding of black slaves as livestock. Africans brought to America and Indigenous Black Africans that were native already existing in America suffered a harsh reality. Black Americans were counted as 3 to equal 1 to a white man, or as some would say 3/5 a human being by law, animals to be dehumanized, to disparage the obligation to grant them the basics of human quality of life. This helped to detour racist whites to treat them with anything other than property. Blacks fell outside the realm of racist white morality. Many can argue, that this is so long ago and too old. Well, our American Constitution is old as well, yet we still hold its history and purpose to shape our lives and rights we advocate today. From the time that South Carolina started its early form of policing, they enacted it as Slave Patrols. These were organized groups of armed white men who monitored and enforced discipline upon black slaves in the antebellum U.S. southern states. They also formed river patrols; these were patrols formed to prevent any escape of slaves by boat. The first slave patrols were formed in 1704, before the inception of the United States. So, America has had these patrols from the very beginning. Their focus was to, terrorize blacks and their communities, keep them from congregating, return them to plantations, enforce curfews, and question all and every intention.

People that are unfamiliar with the black community or any of their plights can be dismissive, deflect, or deny the claims that thousands of Americans are making across the country. That the playing field has been unfair and bias for a long time. They will use talking points of black on black crime or illegitimate community comparisons, to diminish the humanity that is felt by the loss of black life. Some cannot distinguish blacks that do crime from an average black citizen, since they already have crime, doing more crime to them hurts no one. Crime happens in all communities of all colors, often between people geographically close to one another. Crime also increases in areas of poverty, followed by a lack of resources and opportunity, these lead to personal despair and desperation. Police take an oath and are held to a higher standard than criminals, that is why they are funded, to do the things the criminals would not. When criminals infiltrate the ranks of law enforcement to wear a badge, murder and get off with impunity, that jeopardizes, not just one person but a whole community. When gofundme accounts raise money for criminal police officers, that’s an entire community funding another human being to be a serial killer within an impoverished community. Whether its five deaths or five thousand, just one innocent life is one too many. Some see deaths of other races and ethnicities and feel like black lives are getting a spotlight where others should. The over abuse of power should arm other groups to speak out. Like in the death of the young white man 26-year-old Daniel Shaver. A horrible and extremely disturbing video of how officer Philip Brailsford, forced a game of “Simon Says” on Daniel and when he felt he didn’t fully comply with what was asked, he shot and killed him. you hear while 26-year-old Daniel Shaver cries pleading for his life, as Brailsford tells him if he moves wrong he will kill him. A serial killer hiding behind a badge, who wasn’t convicted of the 2016 killing.

“Injustice anywhere is injustice everywhere.”  – Dr. King. We know that and see that. The media manipulates us and parades around to our families the disproportionate killing of unarmed black citizens. We are tired of it happening, we are tired of the police abuse and we are tired of being the guinea pig for other groups and media agenda.

With that said, our marginalized brothers and sisters, be glad, you do not need a movement in this regard, to tell the nation to stop killing us! Stand with us. As we have seen, historically when black people have marched all marginalized groups have benefited, they always have. New policies or laws often pass that do not just benefit blacks. look at the 60s marches. This time is different.

So now, Blacks are telling the world we want something specific to black people. Stop pandering specifically for African American votes, to do nothing specific for them. We have demands. These horrific incidents have spotlighted disparities that have been long overdue. Systemic problems in the black community. Our recent protests are now bringing a spotlight to many other unfortunate issues that need to be addressed in black communities nationwide. 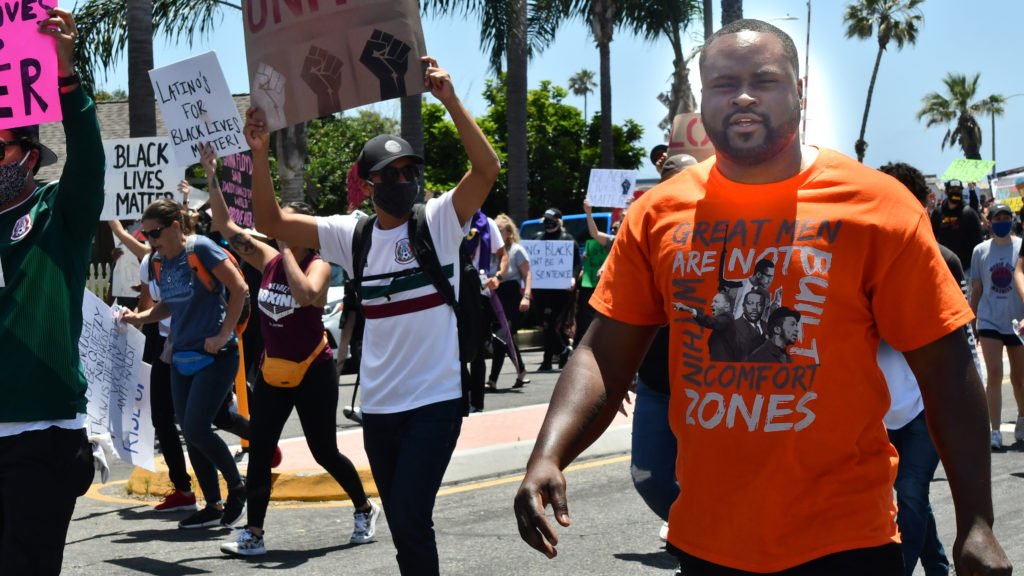 Access to clean drinking water, as in one of many cases like Flint Michigan. Fair Housing for the homeless for example California, disproportionately blacks without shelter, this problem has devastated Oakland, San Francisco, San Diego, and Los Angeles. How has an ethnic group of people been here before America’s inception, built the country, and 500 years later go without the basics of food, cloth, and shelter? These problems were reinforced during the time of redlining and laws prohibiting blacks to live in white neighborhoods. Public Education issues, property tax in black neighborhoods not funding black schools, Getting more black homeownership, and real estate investors. Also getting funding for more affordable private black education institutions. Exoneration of non-violent offenders that are black inmates, rehabilitation centers for drug offenders. Defunding or reforming law enforcement institutions. Creating more healthy food outlets, land for developing more urban farms, farmers’ markets, allowing more of the organic food markets to replace liquor stores, and fast-food restaurants. Centers for economic literacy and business development, more areas that people can learn financial literacy to be taught, banking, power of credit for business loans. Black business is on the rise and people need capital to fund and expand their business. More black holistic medicinal centers, historically the black community has had less than a great experience with the American government and experimentation. Having alternative choices for our health more readily available, rather than large corporations to build vaccine clinics with undisclosed ingredients or intentions. Finally, to cover the subject largely of Reparations, this becomes an interesting part of our community focus. The question is will many of our white allies remain? The fight becomes different when economics is being contested and wealth distribution goes into the hands of citizens and not institutions, plans, and projects.

These are many of the concerns being brought to the table. Oceanside marched to see some of these changes on a local level and spoke with NAACP officials in San Diego about some of the concerns. We have a long road ahead, but this was a great start to what is to come.